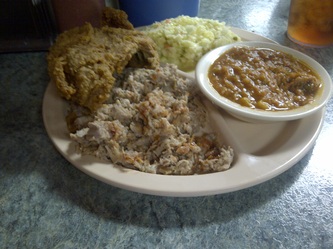 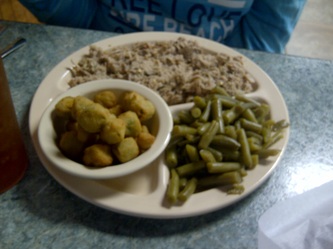 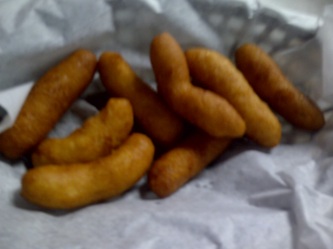 A few years ago we tried a BBQ restaurant in another city of North Carolina, so we knew what to expect. Holt Lake provides a casual atmosphere, homestyle food, and friendly service.

We were quickly seated, and our waitress was friendly and attentive.  For beverages, we ordered tea and the restaurant had the sweet and unsweetened tea already on the table in pitchers for their guests.

Greg ordered the Pork BBQ and fried chicken plate, with cole slaw, and brunswick stew. The chicken was crispy while still moist on the inside, the cole slaw had a nice vinegar tang, and the brunswick stew was flavorful and filling.

I ordered the Pork BBQ plate, with fried okra, and green beans. The pork was moist and seasoned nicely with their vinegar and red pepper BBQ sauce, the green beans were flavorless, and the fried okra were just okay.

We both agreed that the highlight of the meal were the Hushpuppies. They were sweet, salty, moist, and delicious!!

If you are looking for a homestyle meal Holt Lake Bar-B-Que and Seafood is a good choice.

March 2011We visited Pirates Landing based on reviews we had read. The food and service were good and priced well. The restaurant is nice and not overly animated. The one bad thing was with it's first impression. The fish pond out in front of the restaurant did smell badly and probably needs a really good cleaning.